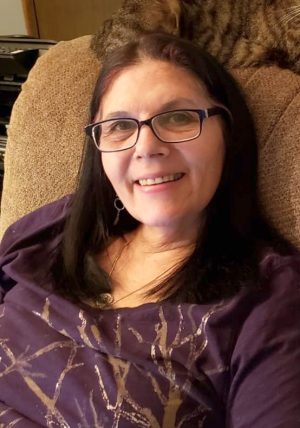 Janeen Lee Brown, born February 2, 1958, passed away in Regina, SK on August 2, 2020, with her family by her side. She is lovingly remembered by her husband Douglas Brown and children: Summer Duval, Megan and Brandele Brown. Janeen is also remembered by her grandchildren, Jordan, Jace, Ava and Maci Duval; as well as her
father-in-law Gordon Brown; sister-in-law Judy Bolton (Kevin); and her siblings Jay Marsh, Mark Marsh, Julie Barden, Kathy Shultz, and Wes Keller. She is predeceased by her mother Faye; father Leeroy; and sister Barb.
Janeen was born in Kalispell, Montana to Faye and Leeroy Marsh and spent her childhood years in the picturesque Flathead Valley. She worked with the U.S. Forest Service before moving to Canada with Doug in 1980. Janeen and Doug celebrated their marriage in 1985 and made Claresholm their home. During these years, Janeen worked a variety of jobs in the Claresholm area before giving birth to her daughter Megan in 1989. In 1990 the family relocated to Lethbridge before moving again to Edmonton in 1992. While in Lethbridge Janeen and Douglas welcomed their second child, Brandele.
In 2007, Janeen and her family moved to a farm near Pense, SK where she enjoyed spending time with her family, trying out new recipes, and caring for a menagerie of animals. Over the next thirteen years Janeen initially worked for the City of Regina before becoming a vital employee in the Faculty of Business Administration Office at the University of Regina. While at the University, Janeen continued her education completing a Certificate in Local Government Authority.
Janeen will always be remembered for her kind nature, incredible work ethic, and giving spirit. She was someone who managed to bring a little magic into the world and always had time for her family and friends; working tirelessly to ensure her family and pets were cared for. She will also be remembered as the ‘animal-whisperer,’ who took in any and all animals in need. Janeen offered her charges the same selfless, loving care that was the cornerstone of her character.
Donations can be made to Living Sky Wildlife Rehabilitation in remembrance of Janeen.