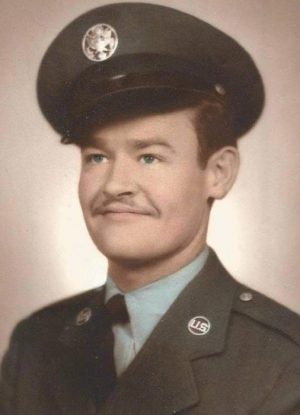 With both his mind and sense of humour intact until the end, Jocelyn and Cliff Dimm would like to share that their father, Harvey Luther Dimm, passed away peacefully in Claresholm, Alberta, on Sunday, January 26, 2020, at age 91, with his family by him in his final days.
Born in Granum on June 15, 1928, to Pearl (Jacobson) and Thomas Dimm, Harvey attended school in Granum, AB and McKee High in Vancouver, BC where he played guard on the football team.
Following high school, Harvey enlisted in the United States Air Force during the Korean War; serving as an Aircraft Mechanic/Electrician at Shepard AFB in Witchita Falls, Texas; and Burtonwood AFB in Liverpool, England during the Berlin Airlift. Upon return to Canada, Harvey married Marilyn (Smith), mother of his two children; a second marriage to Joyce (Gaudry; div) and ended his days a happy and proud father and grandfather.

Harvey was predeceased by his parents; his brother Frederick, and sister Goldie (Gail) Husted. Harvey is survived by sister Merle (Maurice) Matheson; daughter Jocelyn Dimm (Harvey); son Clifford (Ronda) Dimm; and granddaughters: Madeleine and Holly Dimm.
Harvey farmed north of Granum for several years, as well as running a large hog operation. He later took over the Dimm Ranch, south of Granum, which he ranched more than thirty years.
According to his wishes, a Celebration of Life will be held later this spring; date to be shared at a subsequent time. In lieu of flowers, donations can be made to the Claresholm & District Health Foundation, PO Box 2638, Claresholm, AB T0L 0T0.