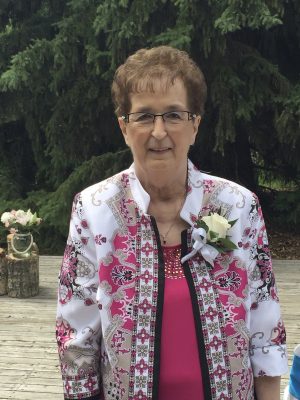 Mrs. Theresa ‘Terry’ Dion (nee Gaboury) passed away, with her daughters by her side, on Friday, January 31, 2020 at the age of 79 years. Terry was born on September 30, 1940 in Prince Albert, Saskatchewan. She was the seventh of eight children in her family; and had a typical fun-filled life growing up on the family farm just outside of Spiritwood. Terry left home at the age of seventeen to start her nursing career. A few years later Terry was introduced to the one and only love of her life. She married Robert ‘Bob’ Dion on April 25, 1964. They began their life together in Red Deer, Alberta, where she worked as a Nurses’ Aide.  They also lived in Edmonton and Olds before moving to Stavely in 1975, where they owned and managed the hotel. The opportunity to spend more time with their grandsons brought them to Red Deer in 2004, where they enjoyed their retirement years. Family was Terry’s number one passion. She loved to host family dinners and sit back and enjoy the laughs. And, there were many! Home decorating was her passion, work ethic was a standard and she was always quick with a one-liner. Terry’s fondest memories were of camping. It is this love of the outdoors mixed with family and friends that will continue to live on through her children and grandchildren. Terry will be lovingly remembered by her daughters, Kathy (Craig) Topping, Brenda Dion (Colin Woolsey); her grandsons, Mitch and Joel Topping (Bretton Schmidt), Ryan and Cole Pfeifenroth; and her step grandchildren, Samantha (James) Morrison and Meagan Woolsey.  She will also be sadly missed by her brothers, Leo (Dot) Gaboury, Paul (Hilda) Gaboury and Andrew (Anne) Gaboury; and her in-laws, Phil Poulin, Louise (Walter) Chilabeck, Marlene Dion, Jeanne Gagnon, Lionel (Liz) Dion, Marie (Murray) Geenen, Bertha (John) Couture, Marion (Harry) Surcon, George Boser and Bill Semeniuk. Terry was predeceased by her husband, Robert in 2011; her siblings, Phillip Gaboury, Robert Gaboury, Lea Poulin and Claire Meier; her in-laws, Raymond Dion, Yvonne St. Amant, Paul Dion, Germaine Semeniuk and Leah Boser; along with several other special in-laws and nephews.

“Your life was our gift, your memory a treasure.

You are loved beyond words and will be missed beyond measure.”

Special thanks to the nurses and staff at Timberstone Mews. If desired, Memorial Donations in Terry’s honor may be made directly to the Parkinson Association of Alberta at www.parkinsonassociation.ca. Condolences may be sent or viewed at www.parklandfuneralhome.com. Arrangements in care of Parkland Funeral Home and Crematorium, 6287 – 67 A Street (Taylor Drive), Red Deer. 403.340.4040.