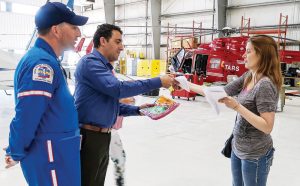 gratitude - Recently Yvonne Perry, of Claresholm, visited the STARS Air Ambulance headquarters in Calgary. She had been saved by STARS nine years ago, and wanted to express her appreciation to the crew who saved her life. Here, she presents them with a letter expressing her gratitude and a card made by her stepdaughter Hailey. Photo submitted

Whenever Yvonne Perry looks to the sky and sees STARS Air Ambulance flying by, she is reminded how nine years ago it was her in that helicopter being kept alive by the personnel on board.

Recently, Perry travelled to Calgary with her family and a friend where she visited STARS and personally thanked the men and women who saved her life after a motor vehicle crash.

It was early afternoon of May 25, 2010 when Perry accepted an invitation from a friend to go for a ride on his motorcycle.

The motorbike was struck by a semi-truck, launching Perry into the air, landing nearly 200 feet away in the ditch.

She was taken to hospital in Claresholm then flown by STARS to Calgary. She was declared dead three times, but the tireless efforts of health-care professionals brought her back.

Perry fought and battled hard for months in hospital followed by physiotherapy.

Faced with the possibility she may never walk, Perry now rides her bike and recently completed a five-kilometre walk.

At the time of the accident, her son Christopher was 10. Two months ago Perry watched him graduate high school.

She has recently become engaged to the man of her dreams, and has a beautiful step-daughter who she watches play soccer, walks to school, and helps her learn to read.

She also has a job she loves and has a passion for at Sparta Boutique where she meets all sorts of people.

So, it was time to meet the people who saved her life.

“A few weeks ago, we went up there,” Perry said, of her trip to STARS headquarters in Calgary. “It was very emotional.”

She met the flight nurse, pilot, and one of the paramedics who were with Perry after her accident.

“I hugged them all,” Perry said, and she took them all flowers.

She asked if they remembered her.

“(So) they remembered me,” Perry said with a smile.

Carrie Ann Dahl was the one who took Perry to the STARS facility.

She said Perry wrote a letter of thanks and gave one to each of the crew she met.

The letter outlined what Perry has been feeling.

“They not only saved my life, but how much they mean to me,” she said. “Without them, I wouldn’t have made it.

“I just wanted to say thank you to everyone.”

She was given a VIP tour of the STARS facility including the hangar bay, office area, and much more.

“It was really cool,” she said.

Perry also sat in a helicopter, where the pilot explained all the controls to her.

“The front seat is much more comfortable than the back,” she joked.

“(The tour) was breathtaking,” she later added.

Perry was also given a ring, presented to people touched by STARS.

“(It makes you) part of the official STARS family,” Dahl said.

In turn, Perry’s stepdaughter Hailey drew a card they hung up in the STARS headquarters.

Dahl noted the records are sealed so the STARS personnel have no idea what happens to the patients they treat.

“Not a lot of people thank them,” Dahl said.

In fact, they had to request Perry’s permission to look at her reports.

Now, Perry wants to help STARS and offered to volunteer with fundraising efforts and spreading the word about STARS.

“More people need to share their stories about STARS,” Dahl said, because then people would be even more willing to support them.

The trip is all part of the Bucket List program at Sparta House, where they make dreams come true.

“That was the number one thing on her bucket list,” Dahl said.

She helped Perry contact STARS, drove her to Calgary and helped with the letter.

The trip also helped Perry and her son move forward.

“It helped us both heal,” she said.