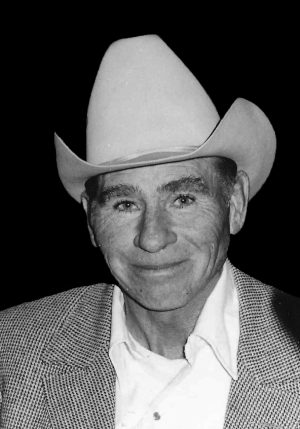 Wesley Albert Alm was born July 29, 1925 to Lillian and Albert Alm in Cabri Saskatchewan. He moved to Olds, Alberta with his family and farmed there until they bought the SN Ranch west of Claresholm in 1947. Wes married the love of his life, Dix Holroyd in 1949, and they raised their 4 children on the ranch they built, the Bar 15, in the Porcupine Hills. Wes’ love for the land and his cow herd were his top priority. The beginning of his ranching career was spent breeding and raising the best hereford herd he and his Dad could. Starting in the late 1960’s, he was instrumental in bringing the first full blood Simmental cattle to Canada from Switzerland. Wes was a long-time member and past president of the Alberta Simmental Association, and a long-time member and Board Member of the Canadian Simmental Association. Wes was also very involved in both the Claresholm 4-H Beef Club and the Claresholm 4-H Light Horse Club for many years. Wes always had an interest in current events and served as counsellor for the M.D. of Willow Creek for a time. After Dix’s passing in 1995, Wes eventually found his new love, when he met Annette Rush. Wes was pre-deceased by his parents, his wife Dix, infant daughter Donna, His sister and brother in law Fran and Miles MacKay, and his brother and sister in law Joan and Murray Alm. Wes is survived by his loving partner Annette, daughter Anne (Quentin) Stevick, daughter Dixie Shierman, son Glen (Donna) Alm, daughter Julie (Mark) Shearer. He is also survived by his grandchildren: Bo and Linda Shierman, Ty and Erin McIlwraith, Jamie and Brett Lamb, Lindsay Shierman and Dave Coone, Karli Alm, Katie and Lukas Durec, and Josh McIlwraith. Also surviving Wes are his much-loved great grandchildren: Carter, Ayla, Edison, Zoey, Zachary, Westin, and Freya. Wes – our Husband, Dad, Grandad – We love you and will miss you. Rest in peace.