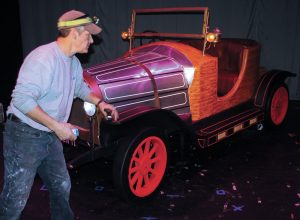 As the Claresholm Arts Society’s production of “Chitty Chitty Bang Bang” recedes into the distance, one lingering question remains: what is going to happen to that car?

The car was undoubtedly one of the stars of the show.

For those who were unable to see “Chitty Chitty Bang Bang”, the car is a major part of the plot, whether it is flying in he sky or floating on the ocean.

The prop itself is a labour of love for several local volunteers.

Gordon Groome and John DeDominicis began work on the car back in the early part of October in Groome’s garage.

They kept at it for more than three months, eight hours a day. 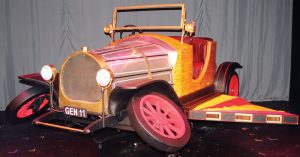 Scavenging parts from everywhere, and re-purposing them for use in the car, they brought some pictures to life.

Whether it was a wheelchair undercarriage, a transmission hoist, or a wrench set used for a universal joint, everything was fair game to bring the car to life.

The car is designed for two adults and two children.

It moves up and down, simulates flying, and the wheels turn. No, not round and round like the average tire, but they turn from perpendicular to the ground to parallel to the ground when Chitty flies.

Speaking of flying, the car also has wings to fly.

When it is dark, the car has working headlights and dashboard lights. 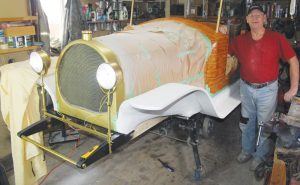 The entire prop is remote controlled too, so there is no need for a tangle of wires and cables to make it move.

Groome winters in the United States, so unfortunately he was unable to see the finished product.

The car is currently in storage, and its future has yet to be determined.

Representatives of the art society said it likely will be sold, especially if another theatre group is staging “Chitty Chitty Bang Bang” and needs a car.