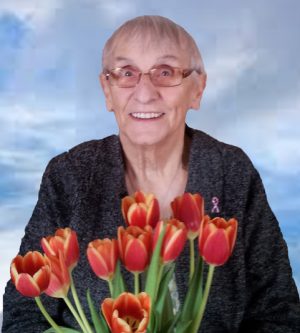 Annigje (Ann) de Valois ( nee van Bree) passed away at Claresholm General Hospital on Monday July 29 2019 following a brief illness at the age of 94 years.
She is survived by her daughter Dr Beverley de Valois (Lee Cotton), her granddaughters Dr Kari McLeod (Chris McKerley) and Carmen McLeod, and granddaughters Tamsen, Roslyn, Jessamine and Skye McKerley and Hayden McLeod, and by her sister Jannie Kooyman van Bree.
She was predeceased by her husband Peter de Valois and her eldest daughter Jeanne Cornelia de Valois.
Ann was born September 6, 1924, the seventh of a family of 14 to Teuntje and Jan van Bree in Oud-Beijerland, the Netherlands. She grew up during the Great Depression and occupied Holland in World War II. Following the war, she married Peter de Valois in 1945 and their first daughter, Jeanne, was born the following year. In 1952 this small family emigrated to Canada where they initially settled in Barons AB, moving around farms in the Barons Carmangay and Claresholm region in the years that followed. In 1956, their second daughter, Beverley was born.
In 1969, Ann began her career outside the home and off the farm, working at the Claresholm Care Centre. The family moved into the town of Claresholm in 1971 where Ann became an active contributor to the community, both in her professional role and her participation in many organisations including the Senior Citizens Drop-In Centre, Meals on Wheels, Claresholm United Church, and Porcupine Hills Lodge. She remained socially active until her recent illness and has a wide circle of loyal and enduring friends.
She took especial pride in her career at the Claresholm Care Centre, where she worked until her retirement in 1989. Ann is a much loved and respected member of the community; she will be greatly missed by her loving family, her many treasured friends, and by all who were blessed with the gift of knowing her.
A Celebration of Life was held at Willow Creek Funeral Home.
Memorial donations may be made in Ann’s name to Porcupine Hills Lodge and Senior’s Foundation, P.O. Box 790, Claresholm AB T0L 0T0.
Condolences may be forwarded to the family at www.willowcreekfuneralhome.com
Arrangements entrusted to Willow Creek Funeral Home,
Claresholm. Tel: 403-625-3212