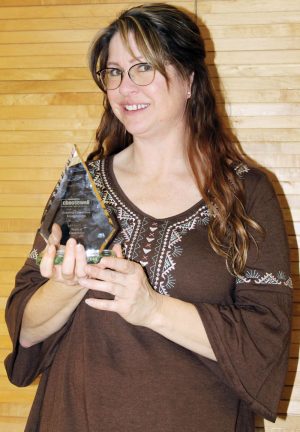 award winning - Claresholm recently received a ChooseWell Healthy Community Award for "Creating supportive environments" for communities with population between 1,000 and 4,999 people. It was the second year in a row Claresholm has won this award. Denise Spencer, the town's recreation manager, above, submitted the application and accepted the award at a conference in Jasper. Photo by Rob Vogt

The Town of Claresholm has received a provincial award for its commitment to being a health community for the second year in a row.

Denise Spencer, the town’s recreation manager, accepted the ChooseWell Healthy Community Award for “Creating supportive environments” at a ceremony on Oct. 25 at Jasper.

“I was extremely pleased,” Spencer said. “I was excited to hear we won for the same category.”

The award, offered by the Alberta Recreation and Parks Association, celebrates the efforts and achievements of communities and wellness champions across Alberta in promoting healthy eating and active living and creating conditions where the healthy choice is the easy choice, through recreation and parks.

Claresholm was recognized in the category of communities with populations of 1,000 to 4,999.

Spencer said the community was recognized for a number of projects undertaken by individuals, community groups, and the Town of Claresholm.

She highlighted Claresholm’s first Winterfest in February, which was the brainchild of local volunteer Karen Linderman.

“In the end it all came together,” Spencer said.

She had grown up around festivals such as that in Saskatchewan, and was reminded again of them on a trip to Europe.

“I thought we should do that here,” she said.

So Linderman contacted the town’s economic development officer and every service club she could.

She knew it was too much for one person to do, but a community could do it.

“The beauty of it was the collaborative way it came together,” she said.

Each group took care of one activity and the result was a successful day of events.

There were other initiatives that led to the ChooseWell award as well.

Spencer also noted the application for Kraft Hockeyville, which included a community rally at the arena; the new Kin Trail; and the two new outdoor fitness parks.

Spencer focused on one specific aspect of the community.

“Our willingness of community members to work together on a common goal,” she said.

West Meadow Elementary School organized volunteers to build their new adventure playground in September of 2017, and the new Lions playground was completed in June of 2017.

The Saturday free sponsored swim was another initiative, made possible by four community sponsors.

There was a wide range of activities such as the good food box program; indoor and outdoor pickleball; the Pumpkin Festival at West Meadow Elementary School; the Zombie Walk; and much more.

“It’s amazing to see the growth within the community supporting each other,” Spencer said.

“The support that is garnered – it’s impressive to be part of.”