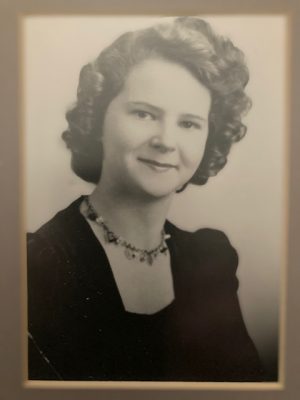 November 6, 1924 – December 17, 2021
Ruth Towill passed away in
Fort Macleod, Alberta on
Friday, December 17, 2021
at the age of 97 years.
Born in Regina, Saskatchewan to Frieda and Roy Harding, Ruth was the oldest of three sisters. She grew up and graduated from high school in Saskatoon. Music was a joyful part of her upbringing and her adult life. She studied piano, becoming an accomplished pianist and organist. In midlife, she was the organist at the Anglican churches in Claresholm and Nanton, Alberta for many years.
After high school, Ruth attended nursing school in London, Ontario and became a registered nurse. She then moved back to Saskatoon, where she married Arthur Towill in 1948. Together they raised their four children, living in various northern Saskatchewan communities. In Prince Albert, Ruth worked as a nurse at the Victoria Union Hospital. Later the family moved to Edmonton, Alberta where Ruth worked in Emergency at the University of Alberta Hospital and attained the position of Head Nurse.
In 1974, Ruth accepted a nursing position at the Lander Treatment Centre in Claresholm, Alberta. After some years working as a nurse, she became an addictions counselor and subsequently was promoted to management. In 1990, she retired from her successful and fulfilling career. After retirement, she continued her association with the Lander Centre as a volunteer to develop and deliver a series of interactive lectures on spirituality, which were very popular with the clients and staff.
Ruth was smart, strong, creative, energetic, kind, compassionate, humble and modest. She had insatiable curiosity and loved to read and learn about a wide variety of topics from religion and spirituality to quantum physics, the universe and the environment. She had a great interest in nature, with a particular love of trees and wildlife. She shared this passion for nature with her children, grandchildren and great grandchildren.
Ruth was also an artistic and skilled knitter, quilter and needleworker. Her creations live on in the homes of her children and grandchildren. A captivating storyteller, Ruth had a wonderful sense of humour and a remarkable memory. Even at 97, she could still vividly recount tales from her childhood, youth and young adulthood.
She also enjoyed writing stories and poems, some of which were published in various community newspapers in Alberta and Saskatchewan.
Ruth will be lovingly remembered and sadly missed by her four children, daughter Judy Orr and sons John (Gail), Alexander “Sandy” (Leah) and Michael (Marvis); seven grandchildren, Danin (Paul), Shauna (Ron), Mercedes (Michael), Perry, Donovan, Mathew (Dom) and Chad; 11 great grandchildren; her sister Mary Jenkins; and numerous nieces and nephews. She was pre-deceased by her companion George Lepard; sister and brother-in-law Joy and Neil McLeod; son-in-law Peter Orr; brother-in-law Bill Jenkins; niece Paula Jenkins; and her parents, Frieda and Roy Harding.
Ruth had a long, productive and meaningful life. May she rest in everlasting peace, and may her memory be eternal. Her body has been cremated, and her family will hold a private celebration of her life.
“Nothing loved is ever lost or perished.”
~ Madeleine L’Engle
Ruth’s family extends their gratitude to Dr. Steven Beekman at Hope Family Clinic, the staff at the Community Support Beds in Fort Macleod, and the staff at the Pioneer Lodge for their care and compassion.
Condolences and memories may be shared and viewed through the Tribute Wall link at the top of Ruth’s obituary page at edensfuneralhome.com