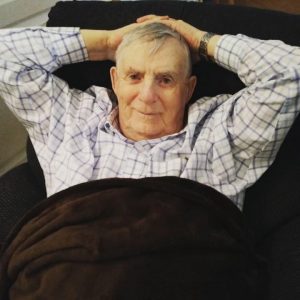 September 17, 1928 – June 17, 2021
Lawrence Kenneth Anderson, known as Ken to his friends and family, passed away on June 17, 2021 at the age of 92. Oldest son of Lawrence Anderson and Addie Hendry Anderson; brother to Freida (Mickey-dec’d) Kovac, Norma (Ed-dec’d) Firth, Ted-dec’d (Sally) Anderson, Jean (Craig-dec’d) Watson, Sharon (Mark) Wood, Richard (Gloria)  Anderson, and Monty (Sharon) Anderson. He will be dearly missed by his family: Donna (Seth) Toone, Bob (Sherri) Anderson, Doug (Linda) Anderson, Mike (Kathy) Anderson, Sandy (Wade) Pierson; his 15 grandchildren; 28 great-grandchildren, and 1 great-great-grandson. He was predeceased by his wife and best friend LaRea, along with his parents.
Ken was born in Cardston, Alberta, September 17, 1928. Working at the creamery from a young age he honed the craft that would later earn him awards for his butter and amazing ice cream. In 1968 he moved with his family to Claresholm when he bought the Claresholm Creamery with his brother Monty. They later bought the Cardston Creamery and ran both.
He was a member of the first motorcycle club in Southern Alberta, having bought the first motorcycle in Cardston. The ‘Myth Boys’ was established in 1947, one year before the infamous ‘Hells Angels’. They created lifelong friendships and continued to ride together until they reached their 80s.
During WW2 he was a member of the Ski Cadets. His service to his country and community continued to be a large part of Ken’s life: later becoming a member of the Cardston Lion’s Club, continuing his service by becoming a charter member of the Claresholm Lion’s Club. He enjoyed the associations he made there.
Ken met LaRea Timms when she was spending time at her grandparents’ in Cardston. He never looked back. They were married on July 11, 1951 and sealed in the Cardston Alberta Temple the following October.
He had a strong pioneer heritage and was a lifelong member of The Church of Jesus Christ of Latter-day Saints.
Ken enjoyed camping, reading and golfing. Ken and LaRea loved their summers at Kootenay Lake. He could often be seen pulling kids and skiers behind his boat and only ever wearing his blue jeans on the beach.
Ken spent his last few years in the Cottonwood Village in Claresholm where he came to love the staff and his fellow residents.
A private service was held for Ken on June 26, 2021.