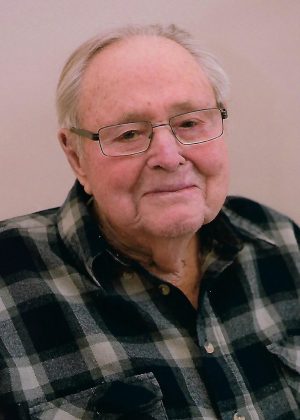 June 12, 1927 – March 19, 2020
It is with great sadness that the family of Alroy Charles Travis announces his passing on Thursday, March 19, 2020, at the age of 92 years.
He is survived by his five children Colleen (Ted), Dale (Jackie), Greg (Karen), Dan, Leisa (Dwayne); eight grandchildren, Sherri, Kim, Scott, Emily, Meagan, Derek, Haley, Amy; and blessed with ten great-grandchildren.
Dad was predeceased by his wife, Annabelle in 2018, and his sisters, Charlotte and Doris, and his brother, Clarence.
Alroy was the youngest child of Gertrude and Charley Travis, born on June 12, 1927. Along with his brother and two sisters, he grew up on his parent’s farm east of Woodhouse. Dad’s early formal education began in the rural Balquihidder school which was a 4 mile walk or horseback ride from his parent’s farm. Dad used to recall that one morning, while walking to school, two trainer aircraft from the British Commonwealth Air Training school collided nearby. Perhaps this incident convinced him to keep both feet firmly planted on the ground.
Dad later attended Claresholm High School. His 1945-46 yearbook described him as “one of their handsome Grade XII students with blue eyes and a winning smile, whose main interests were dancing and skating”. He completed high school in Lewiston, ID.
After returning to Southern Alberta, Dad met the love of his life, Annabelle, and they were married on February 6, 1950. They resided on their family farm operating a mixed operation and raising their family. He was often Mom’s spare school bus driver. In 1991, Dad retired from farming, allowing him more time to pursue his other passion, woodworking. For nearly 30 years he crafted hundreds of beautiful cabinets, wooden toys, and desks for many people.
In 2007, Mom and Dad left the rural life behind and moved into town. There, Dad spent many hours in his workshop, crafting furniture and sharing conversation and refreshments with his neighbours, Frank and Eric. Dad was a member of Alberta Lodge #3 Ancient, Free and Accepted Masons and was presented with his 50 year bar.
His family wishes to express their sincere thanks for the excellent care provided to Dad in later life by the wonderful nursing and medical staff at the Claresholm hospital, AHS Home Care, and the Willow Creek Continuing Care Centre.
As per Dad’s wishes no funeral services will be held.
A celebration of life will be held at a future date.
Thank you Dad…
For everything you did…
For everything you said…(and didn’t say)
For everything you were for your family
Condolences may be forwarded to the family at
www.willowcreekfuneralhome.com
Honoured to serve the family Zentner Funeral Homes Ltd. Claresholm. Tel: 403-625-3212