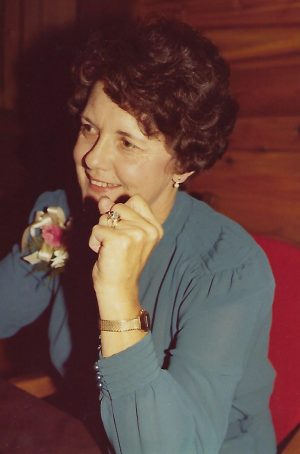 It is with much sadness and love, that the Kidd family announces the peaceful passing of Maxine Kidd.
Maxine was born to Michael and Doris Makara, in Drumheller, Alberta. She was one of 7 children. She took all of her schooling in Drumheller. After graduating high school, she went to work at the Banff Springs Hotel, and had wonderful adventures in Banff. Later she went to Zeballos, B.C., a rugged coastal logging and fishing village, where she worked in a drug store. It was a beautiful location, and quite an experience for a girl who grew up in the badlands.
She married Robert Russell Kidd on January 14, 1950. They lived in Drumheller until buying a ranch west of Stavely, Alberta in the spring of 1953. She was a town girl, moving to the country with not very many amenities. She worked hard, and became known to the area, as a wonderful cook and gardener. If she wasn’t baking or cooking meals, she was probably working in her beautiful yard. She loved the country life and all their special neighbors, the wildlife and all of nature around her, especially the birds. She was an avid bird watcher and knew many species. She was a member of the Royal Purple Lodge for many years, working in the community beside friends and loved playing poker and bridge. Another love of hers was fishing, and when she could find time, enjoyed many enjoyable fishing trips.
Bob and Maxine enjoyed travelling. They went to Hawaii, many U.S. states, the British Isles, Dominican Republic, and took an Alaskan cruise, to name a few of their travels.
Maxine raised 4 children: Rodney Kidd, Brady (Debi) Kidd, Karen (Jim) Baker, and Cathleen (Dale) Kidd. She had 6 granddaughters: Shannon, Laura, Kendra, Karly, Tarran and Kalyna. She also had 12 great grandchildren: Richard, Kalin, Riley, Serena, Kamryn, Taylor, Chett, Luca, Rio, Lachlan, Ryder and Megan. Plus 2 great great grandchildren: Noah and Melody. Maxine is also survived by her brother Douglas (Mary) Makara, her sister Rosemary (Michael) Pearce; nieces: Dixie Makara and Charmaine Berntsen, Susan Makara and Debbie Pringle; nephews: Ron Makara, Tim and Mark Makara, and Derrick Berntsen and great niece Michelle Worrall.
Maxine was predeceased by her husband of 64 years, Robert Kidd in 2014 and her daughter Cathleen Joy Kidd in 2017.
As per her wishes, there will be no service. The family are planning a private graveside service in the spring.
In lieu of flowers a donation may be made to: Stavely Royal Purple Elks, General Delivery, Stavely, AB. T0L 1Z0
Condolences may be forwarded to the family at www.willowcreekfuneralhome.com