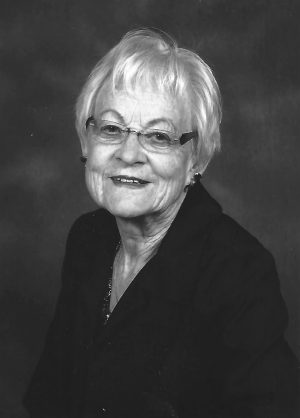 It is with sadness in our hearts that we announce the passing of Kaye (Kathleen) Fisher on Tuesday, May 26, 2020. She was 89 years of age. She died peacefully in her sleep while a resident of the Willow Creek Auxiliary Hospital.
Kaye is survived by her son, Don; her daughter, Laurie; son-in-law, Pete Kisner; two grandsons: Erik Kisner (Sexsmith) and Joel (Wenoa) Kisner (Grande Prairie), and two great-grandsons: Gabriel (11) and Jaedon (10). She is also survived by two sisters, Jean Burgess (Calgary) and Beverley (Les) Ready (Campbell River, B.C.). Kaye was predeceased by her husband, Herb, in 1985 and by her long time friend and companion, Tom Stockdale in 2006. She was also predeceased by her parents, her sister, Joan Engle, and two brothers-in-law.
Kaye was born in Vulcan, Alberta on December 15, 1930 to Hilda and Eric Thorp. She spent her childhood growing up on a farm near in the small hamlet of Ensign and she went to school in Vulcan. When she was 17 she went to Normal School in Calgary and obtained her teaching certificate, returning to Ensign for her first two years of teaching. It was there she met Herb and they were married on April 30, 1949. Herb was a CPR station agent and they moved to Saskatchewan before returning to Alberta (Halkirk) in 1953.
Kaye, Herb, Laurie, and Don moved to Claresholm in 1962 and Kaye remained a resident there for the rest of her life. She was a school teacher until her retirement in 1988 and always spoke proudly of all the students she taught, many of whom also remembered her and let her know how appreciative they were of the part she played in their education. She also believed in furthering her own education, completing her degree in education, getting an arts degree at the University of Lethbridge shortly after it opened, and receiving a graduate degree in children’s literature in Boston in 1977.
Kaye’s other passion was travelling. She spent summers travelling until her retirement after which she spent several months at a time travelling to any number of countries, both alone and with her friend and companion, Tom or with family. India was one of her favourite destinations and she travelled there 7 times and wrote a book about her travels there. She was also a frequent visitor to Fiji and the Cook Islands. Laurie has often said there are probably more countries she has visited than she has not.
The family would like to acknowledge and thank the staff of the Cottonwood Village and the Willow Creek Auxiliary Hospital as well Dr. Fraser Lieshman for their attentive care over the past 2 years. Special thanks go to Julie Isaac and Jim Fuller, both of whom have gone above and beyond to support Kaye in whatever ways they could. They have been extraordinary friends to her.
Kaye will be cremated; however, due to pandemic restrictions, a memorial service will be held at a later date. It is hoped that all her friends will have an opportunity to pay their respects when a gathering of that magnitude can be held safely. Condolences may be forwarded to the family at www.zentnerfuneralhomes.com