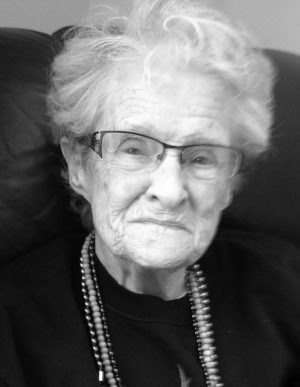 November 18, 1924 – December 26, 2019
It is with much sadness and love, that the Olsen family announces the peaceful passing of Fleurette Olsen (nee Harvey) on December 26, 2019.
Born on November 18, 1924 in Jonquière, Quebec, Fleurette was the second youngest of five children. A bright, earnest student, she attended Catholic boarding school in Jonquière, completing her education at the Ursulines College in Stanstead, Quebec, where she obtained her Commercial Secretarial Diploma for both French and English. She then began her career at Alcan, formerly the Aluminum Company of Canada.
She met and married Lewis Edward Olsen while he was stationed with the Radar Squadron in the Armed Forces at Bagotville, near Jonquiere during WW II. They were married in Quebec in February 1946. Leaving her parents and siblings behind, Lewis and Fleurette travelled by train from Quebec to Claresholm, Alberta to undertake farming Lewis’ Norwegian homestead.
Raising a family of five children from the ‘40s onward into the ‘70s, Fleurette, strong in her faith, tackled life with graciousness, generosity, persistence, patience and love. She was an incredible mother and homemaker particularly excelling as a gardener – growing, harvesting, canning, freezing and pickling her own produce, (not to forget being an avid Saskatoon berry picker). She later returned to work as secretary to the Director of Nursing at the Claresholm Care Centre. While working at the Care Centre, she completed the SAIT course to become one of the first Medical Records Technicians in Alberta.
Retiring together in the late ‘80s, she and Lewis enjoyed spending time with their expanding family, including their grandchildren, and travelling. Sadly, Lewis passed in 1991. Always a family with pets, Fleurette’s cocker spaniel, Buffy, was a beloved companion for twelve more years.
Fleurette continued to be active in Christ the King Catholic Church, particularly the CWL and in the Claresholm community. She moved to Calgary in 2013 to be close to family, eventually transitioning to Age Care Seton then to Age Care Sky Pointe. The family cannot thank the Age Care community enough for the wonderful care and compassion they gave to Fleurette.
The family would like to express gratitude to all who touched Fleurette’s life in so many ways. Mother will be deeply missed by all!
Fleurette was predeceased by her husband Lewis and her oldest child, Chris. She is survived by four children, Harvey (Jeanne), Jacqueline, Linda (Frank), Brenda (Peter), her grandchildren Geneviève (Josh), Caroline, Terri (David), Nicholas, Samantha (Brandt) and her 3 great grandchildren, Madeleine, Ella and Zoe. As well, though predeceased by her siblings, Fleurette remained in touch with her nieces and nephews in Quebec.
A Funeral Mass was held at Christ the King Parish –
344 50 Ave W, Claresholm, Alberta on Thursday, January 2, 2020 at 11:00 A.M
In lieu of flowers, please donate to Diabetes Canada -1300-522 University Ave., Toronto, Ontario – M5G 2R5 .
Condolences may be forwarded to the family at www.willowcreekfuneralhome.com