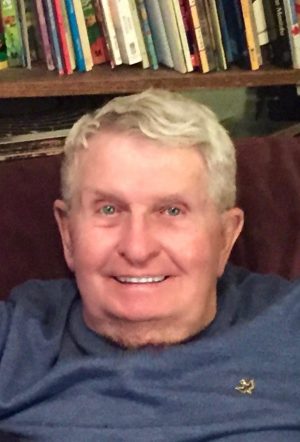 Wallace John Flanagan, age 83, passed away April 8, 2020.
Wallace was born in Bassano, Alberta on October 8, 1936. He lived there until his late teens. After the death of his brother Donne, he boarded in Calgary and went to Mount Royal School.
Wallace grew up working in his father’s store, Flanagan Brothers Hardware, in Bassano. He subsequently worked in hardware warehousing in Calgary after graduation.
He’d met his future wife, Marjorie, through a mutual friend when she was in training to be a nurse. He renewed his acquaintance after she moved to Calgary. They started dating and married in April of 1962.
When his father’s health was failing, Wallace and Marj moved to Bassano so he could take over the store. They started a family in Bassano and had two children.
Later, Wallace retrained to become an insurance broker, sold the store, and became a partner of “Green, Flanagan & Maguire” Agencies in their hometown.
Later he sold his share and worked for Wild Rose Agencies in Brooks. There he met his future business partner, Leo Piche.
In 1985, Wallace and Leo bought Claresholm Agencies. The business grew and became even more successful under Wallace’s stewardship.
Upon retirement, he sold the agency, and he and Marj spent many enjoyable winters in their place in Tri-Palms Estates in Thousand Palms, California.
Wallace was more complicated than he seemed to many. He was involved in his community, especially his local golf club. Wallace was an avid golfer and hit a hole-in-one more than once on the local course.
He also was a talented stained glass artist, antique collector, and loved learning about Canadian and local history. He was an avid reader of history and crime fiction.
Wallace loved to joke around. He was a worrier. He was a successful businessman who fostered great relationships. He was intelligent, informed, and cared deeply for others. But above all, he was a dedicated husband.
Besides his wedding ring, his most prized possession was a gift from his wife. A pendant of two hands enclasped, with the words “Always we will walk hand-in-hand.”
Marjorie predeceased him in March of last year. He tried to carry on, but with major health issues and without his partner of almost 57 years, it was a daily struggle.
Wallace is also predeceased by his son Donne, father Wallace, mother Isabelle, brother Donne, sisters Margaret and Dorothy.
He is survived by his daughter Jill, daughter-in-law Deirdre, granddaughter Eilene, grandson Kieran, and nephew John.
His family would like to thank the staff of Cottonwood, Home Health Care, and the team at Claresholm General Hospital. Wallace was blessed to have so many people care for him.
The graciousness and kindness shown to him and his family, especially during the COVID-19 crisis, was unsurpassed, and we thank these services and facilities from the bottom of our hearts.
The Flanagans have always been strong proponents of health care funding. Please consider a donation to the Claresholm & District Health Foundation in Wallace’s memory.