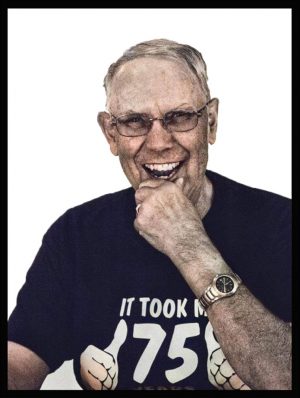 July 22, 1943 – July 6, 2020
It is with heavy hearts and great sadness that the family of
Doug Fletcher announce his peaceful passing on Monday, July 6, 2020 at the age of 76.
Doug was born in Vulcan, Alberta on July 22, 1943. He is survived by his wife of 52 years, Iris (nee McCutcheon); daughters Trisha (Peter) Gibson and Stacy (Rob) Kelly, and son Cody (Andrea) Fletcher; grandchildren, Kassidy, Russell, Fletcher, Megan, Ella, Johnny and Reid; siblings Shirley Wolfe (Vulcan), Allan and Shirley Fletcher (High River), Fay Sorley (Calgary); in-laws Wayne McCutcheon (Mannville), Susan McCutcheon (Vermillion), Barb and Mario Genest (Edmonton) and numerous nieces and nephews. Doug was predeceased by his parents Frank and Madeline Fletcher (Vulcan); his parents-in-law: Ralph and Eva McCutcheon (Claresholm); brothers-in-law: John Wolfe (Vulcan), Einar Sorley (Calgary) and Dale McCutcheon (Vermillion); niece: Deborah (nee Wolfe) Woods (Vulcan); and nephews: Donald and David Wolfe (Vulcan).
Doug was raised on a large family owned and operated farm and dairy in Brant, Alberta. Doug really enjoyed his time on the farm with his siblings, aunts, uncles and cousins. After Doug’s time on the farm, he worked in seismic all over North America from Texas to the North Slope of Alaska. While working in seismic in Radville, Saskatchewan, he met the love of his life, Iris McCutcheon and they were married on July 3, 1968. Shortly thereafter, Doug, Iris and Trisha moved to Vulcan and he began working at Wolfe’s Hardware. In 1973, Dee Jay Hardware was formed with Doug’s sister and brother-in-law, Shirley and John Wolfe; and Doug, Iris, Trisha and Stacy moved to Claresholm where his career in the hardware business began. Over the next 47 years, Dee Jay Hardware transitioned from Link Hardware to Home Hardware. In 1999, Doug & Iris’ son Cody joined the business and in 2008 Cody and his wife, Andrea purchased the business and continue to operate it today.
From the first day Doug arrived in Claresholm, he immediately became involved with numerous community and service clubs and organizations. Doug was a member of and the chair of many community boards throughout the years. Most recently, he was on the Community Hall Board, The Bridges of Claresholm Golf Course Committee and was an active member of the Claresholm Lions Club. Doug was also instrumental in the construction and operation of the Claresholm Curling Club.
Doug loved his family, community and friends. He was always there for anyone who needed him, personally or professionally. He will be greatly missed by all.
In lieu of flowers or gifts, please send donations to the Claresholm Curling Club, Box 1976 Claresholm, AB
T0L 0T0; The Bridges of Claresholm Golf Course, Box 2080, Claresholm, AB T0L 0T0; and the Claresholm Community Centre Association www.claresholmcommunitycentre.com/projects-sponsors/
or e-transfer: donations@claresholmcommunitycentre.com, or Box 183, Claresholm, Alberta T0L 0T0.
Due to COVID-19 restrictions, details on the service will follow at a later date.