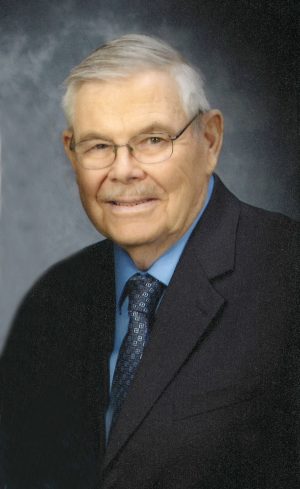 Aylmer Baker of Granum Alberta, beloved husband of Norma Baker, went home to be with his Lord on Sunday, July 12, 2020 at the age of 86 years.
Aylmer was born in Calgary on May 5, 1934, the only child of Harold and Inez Baker.  He was raised on the farm just west of Nobleford and spent his life in the Granum/Nobleford area.  He met his wife Norma Barnes through family friends Laura and Bill Parker and they were married at the house where Norma lived on November 17, 1956.  They were very close, doing everything together, and after 63 years of marriage still inseparable to the end.

They made their home in a few places before settling down at the Barnes house where Norma was raised.  Aylmer drove truck for Noble Blades and their first home was a small house by the elevators in Nobleford.  In 1957 he worked for the Alberta Wheat Pool, first in Nobleford, then Taber and finally Turin.  In 1958 they lived in Lethbridge until moving back to Nobleford where Aylmer helped his Dad farm.  Later that year they moved into the farm home where Aylmer was raised.  In the fall of 1961, they settled in the home where they were married and where they lived and farmed for 59 years.  They had five children … Layne, Brant, Sherry, Barry and Carol Ann.
When not farming Aylmer loved to go fishing with his family.  He enjoyed drawing and leather work, making many belts for the kids.  He and Norma very much enjoyed spending time with their children & grandchildren, and going to all their sporting, 4-H and musical activities.
Aylmer battled cancer and associated ailments for a number of years.  Aylmer’s strong will and God’s hands carried him through these times.  Even when he was getting quite weak, you would find him with his hand weights exercising in his chair, or pushing his walker trying to stay mobile.
Besides his loving wife and five children, Aylmer is survived by twelve grandchildren, Joshua, Jessica (Layne & Donna Baker); Jordan, Branden, Wyatt (Brant & Laurie Baker); Kyle, Darren, Evan (Sherry & Lawrence Vandervalk); Alysha, Joey (Barry & Teresa Baker); Kaylee, Colin (Carol Ann & Allen Zoeteman) and nine great-grandchildren.  Aylmer was predeceased by his parents Harold and Inez.
A private Funeral Service will be held on Saturday, July 18, 2020 at the Granum Christian Reformed Church, with interment to follow at the Church Cemetery.  Due to Chief Medical Officer of Health restrictions, Funeral Services are now limited in size.
Though we cannot have all of Aylmer’s family and friends attend in person, those who would like to watch the service can do so online by going to the Granum Christian Reformed Church YouTube Channel at https://www.youtube.com/channel/UCs0yVlMAC_bnTpqX8Ch0xfA.
It is also available at https://www.mbfunerals.com/listings by clicking on Aylmer’s obituary.