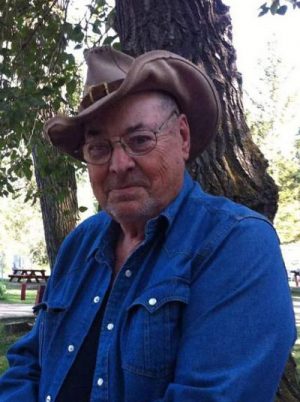 David (Dave) Cumberland McQuigge, passed away peacefully in the company of his family at South Health Campus, Calgary, Alberta on May 16, 2019.
Dave was the first child born to Robert John McQuigge and Dorothy Aretta May McQuigge (nee Roberts) on December 12, 1938 in their country home near Bannockburn, Ontario. He is predeceased by his parents, younger brother James, sister Bernice and oldest son David Shane.
He is survived by his wife of nearly 61 years, Georgena Norma McQuigge (nee Lindsay); his children Patricia Anne (Fabian Demeulemeester) of Chetwynd, BC; Davena Bernice (Robert Berge) of Blind Bay, BC; Robert Daniel (Sandy Strebe) of Aldergrove, BC; Naomi Dorothy (James Summers) of Fraser Lake, BC; Penny Eileen of High River, AB; and Randolph Travis (Charity) of Granum, AB.
Dave was blessed with 15 grandchildren and numerous great grandchildren. Along with many nieces, nephews, and cousins. A large family spread throughout the globe.
Dave worked as a welder /heavy duty mechanic / millright. He was an avid outdoorsman, out fishing or hunting whenever he could. Dave was a man who could find a way to fix anything by using unusual items found about the house and in thrift stores.
Following his military service Dave remained a faithful Legion member in his hometown of Claresholm, AB and was dedicated to his Anglican faith. He loved to socialize and to spread his sense of humour wherever he went. In fact, he often reminisced about the pranks he played on others during his youth which put a smile on our faces, as in knowing him we could always visualize him doing it.
Dave’s true calling was that of a loving Son, Brother, Husband, Dad, Uncle, Grandfather, Great Grandfather and friend. A man loved deeply by those who were closest to his heart.
Dave’s request was to be cremated and returned to Belleville, Ontario to be buried in the family plot beside his parents, siblings and son. This will be done at a later date and will be announced when it is known.
Dave, husband, Dad, brother, grandpa, great grandpa, uncle, friend, we can’t express enough how much we love you – heart and soul. Farewell, you beautiful man, until we meet again.
Arrangements entrusted to
Willow Creek Funeral Home,
Claresholm.