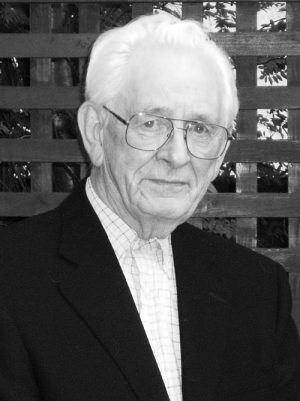 Rankin died peacefully after a full and long life at the home of his daughter Valerie Lowen on Christmas Day 2018.

He was born November 22, 1921 in Wakaw, SK and spent his early years and youth on the family farm near Domremy, SK.

Rankin was predeceased by his wife Daphne Rosabella Louise (Dundas) Hodgins in 2006 and granddaughter Jenna Lowen in 1991.

Rankin left home at 18 to attend Normal School for Teachers in Saskatoon.  He had excellent marks, so was awarded a teaching diploma at age 19, after only one year of post-secondary education.  His first teaching assignment was in Quill Lake, SK in 1940 followed by a second year in Harris, SK.  He decided to pursue further education at the University of Saskatchewan in 1941, graduating with a B.A. in Mathematics in 1945.

He started working for the Continental Life Insurance Company in Saskatoon immediately upon graduation and was later transferred to Regina where he became branch manager.

He married our mother Daphne Dundas in 1949 and they started their family in 1950 with the birth of Bill, followed by Douglas in 1953 and Robert in 1954 in Regina.

Rankin purchased a general insurance agency in Tisdale in 1954, so the family happily settled into life in small-town Saskatchewan.  Valerie was born there in 1959 and John in 1963. He also served as the mayor of Tisdale for two terms in the mid-1960s.

By the early 70s our parents were growing weary of the long northern Saskatchewan winters, so they decided to relocate to Claresholm, AB where Dad purchased another general insurance agency.  The family resided there until Dad’s retirement in 1987 when they decided they wanted to be closer to Valerie and her family in Lethbridge. Mom and Dad enjoyed retired life in Lethbridge along with many happy winters in Mesa, AZ where they were able to make new friends and reconnect with old friends from Tisdale. Dad maintained the family home for a number of years after Mom’s death until he accepted Valerie’s invitation to live with them the last seven years of his life.

Rest in peace Dad after a remarkable life!  We’re so proud of you!

A celebration of Rankin’s life will be held