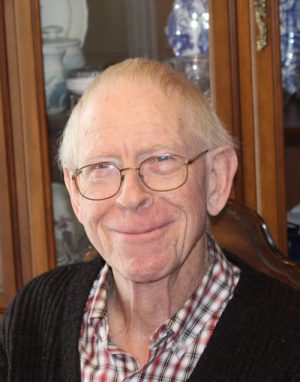 Born in Clinton, ON, to Charles V.  & Mary W. (Bell) Bennett, they moved back to Claresholm, AB, in 1944, where Mary’s family had lived since 1906.  Ralph spent two years at Royal Roads Military College in Victoria, BC, where he met Sharon, his wife of almost 53 years, and they were married Aug 27, 1966.  After obtaining a B.Sc. in Physics from UVic in 1968, he was hired at Malaspina College (Nanaimo) in June 1970.  Until retirement in 2005, he taught mainly Physics labs and Engineering Drafting.   Ralph loved nature and his 5 grandchildren.

Ralph went home to his Heavenly Father on June 24, 2019, in the Palliative Care Unit at NRGH.

Ralph is survived by his wife Sharon; daughter Elaine (Andy) Bradshaw and children Stephen, Julie, Nathan, and Belinda of Nanaimo; son John (Kim) and son Liam of Prince George, BC; older brother John Bennett in Elk Point, AB; and many first cousins in BC and AB.

A Celebration of Life is at 1:30 pm, July 27, 2019, at Bethel Pentecostal Church, Ladysmith, BC.  Condolences can be offered at First Memorial Funeral Services (www.mem.com).

In lieu of flowers, donations in Ralph’s name can be made to University Christian Ministries at www.joinucm.org (specify “Joel Hampson”) and to Loaves and Fishes Food Bank at www.nanaimoloavesandfishes.org.